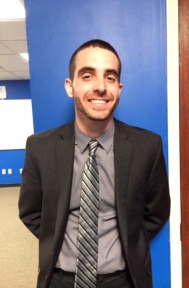 Each week the representatives at Northeast Consulting Group get together and nominate someone who they feel like has been stepping up and setting the pace in the office. This week, Rob Conte is our Featured Employee! Rob has only been with the company for three months, but he has already shown us how valuable he is. He has demonstrated his natural leadership ability and has been a part of the training and development of many of his peers.

So, we decided to get to know Rob a little bit better! Rob was born and raised in Shelton, Connecticut. He currently resides in Derby, Connecticut. He is currently attending Norwalk Community College and is studying Computer Science and Web Development/Programming.

While attending high school, Rob was part of the Wrestling Team, but he does enjoy playing basketball for fun. He also has a passion for philanthropy and volunteered at Relay for Life.

Where sports are concerned, Rob is a diehard New York Knicks fan and loves to come into work every day decked out in Knicks gear, haha! He also likes the New York Mets, New York Rangers, and randomly the Indianapolis Colts!

In Rob’s free time, he likes to play basketball, hang out with his childhood friends, and spend as much time as possible with his nieces and God Daughter.

I asked Rob if he had any hidden talents or random hobbies. He told me that something most people don’t know about him is that he is great at math. But, for the most part he likes to play Frisbee, play the drums, and pretty much go with the flow and do whatever seems like fun at the time!

Thanks for letting us get to know you a little bit better Rob! Everyone at Northeast Consulting Group is so proud of you for what you were able to accomplish in such a short time in 2013. We can’t wait to see what you’ll have in store for us coming up in 2014!